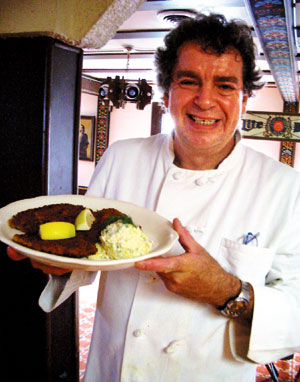 The American Czech-Slovak Cultural Club is hidden in a three-acre compound along the Arch Creek River in North Miami. Every Sunday the members-only club is open to the public for supper serving up sumptuous Old World feasts with many types of Czech beer, shipped in giant kegs.

Now that the weather is cooler, this is the perfect time to go for Chef Miroslav Dusek’s roasted duck, schnitzel the size of a plate, and roast pork encrusted in horseradish, served up with sides of sweet-sour red cabbage, sauerkraut and dill-flecked potato salad.
The clubhouse resembles an enlarged two-story cabin, with a quaintness that comes from a structure that was built in the 1920s and added on to over the years. It was originally known as the Sorenson farm, owned by a Norwegian. In 1949 the area had many Czech immigrants, and several started meeting in a restaurant with the idea of forming an entertainment and social club.

Within three months, 77 members had joined. They pooled their bonds to buy the property, and the club soon became the hub of the growing community. Today there are about 160 members from all over the United States and Europe. The core members reside in South Florida and keep the traditions alive, even if it’s just a quick parky-pause (sausage and beer break) in the bar.

Czech people quaff more beer than anyone in the world — possibly because they make Pilsner, considered by beer connoisseurs to be the best lager in the world. The light-bodied, blond brew has a unique bitter bite to the finish with a slight buttery flavor and strong hops aroma. It was first made in Plzen in what is now the western half of the Czech Republic (formerly Czechoslovakia). Back in 1295, when the country was known as the Kingdom of Bohemia, King Wenceslas II granted the citizens of Plzen the right to brew and sell beer, and the boom began.

Until the 1800s, most beer was dark and murky. That changed when a monk smuggled some bottom-fermenting lager yeast out of Bavaria and it ended up in the hands of a Bohemian brewer. The combined yeast, soft water, native Saaz hops and home-malted barley gave birth to Pilsner Urquell (meaning “original source”), also called the golden brew. You can try this on tap in the club as well as Radegast, named after a Moravian king, and Staropramen, an old Prague lager.

All go well washed down with the huge servings the kitchen dishes out. The menu is limited, scrawled on a board by the entrance. The prices are very fair considering you can bring half home to make another meal. The food reflects the diversity of the Czech-Slovak region with influences from Germany, Poland, Austria, Hungry and Ukraine. Half chickens and ducks are roasted until bronzed, then served with boats of gravy and beds of huskove — large, cloud-light dumplings, made from yeasted dough, boiled and cut with a string into bread-like slices. Rizek, as schnitzel is called in Czech, is breaded pounded pork tenderloin fried up greaseless and crisp, served as an entree or in a smaller portion as part of the sampler platter. This also includes the daily special — hope for chicken paprikash in a sour-cream sauce; roast pork; hulusky, a type of spaetzle; plus a helping of communally served tossed salad, soup of the day (possibly cream of carrot or mushroom potato), dessert and coffee. Don’t forget the beer. Dobrou Chut! (Bon Appetit!)