Before we start, please understand that I am not an expert on the Czech language. My sole reason for writing this article is to help you make use of your computer for communicating in Czech, and without spending any extra money!

The primary use for the Czech keyboard, on my computer, is only to transcribe documents already written in Czech, not create them. All of my grand-parents came from Bohemia. When I was boy, growing up in Berwyn, my parents and grand-parents all spoke Czech around the house, but not Bill (me). I really regret that I didn’t learn the language when I was child. My wife came from the same kind of family (also in Berwyn), but she learned far more than I did. Sure, I learned a lot of words, especially cuss words, but that is of little use when you are trying to communicate in the Czech Republic.

So, here I am trying to talk about the usage of the carka, krouzek and hacek to a bunch of Czechs that, most likely, know the language far, far better than I do. So please forgive me if I make a few mistakes about the language along the way. OK, now we can start this tale.

Recently, some friends and associates from the American Czechoslovak Social Club, in North Miami, FL had the need to create documents in Czech, on a computer. That meant letters with the appropriate diacritical marks. The question was, “How shall we do that?”

We knew that there were commercial programs out there to do the job. In fact, one of the club members was using such a Czech language program, but with limited success. That program didn’t seem to do capital letters with diacritical marks plus the files were saved in an unusual format making it difficult to share files with others.

While we were mulling the problem I dropped Joe Hartzel, CSAGSI President, a note asking what he used for such a task. His immediate answer was, “Windows Multilanguage Support. It’s built-in and costs nothing”.

While I was aware that this function was part of Windows 95/98, I had never even looked at it. Windows Multilanguage Support is not usually installed at the initial installation of a Windows system. So, to use this function it has to be installed. The main prerequisite for installation is the original Windows CD. If you are using Windows 95 or 98 on your computer, you should have that CD. More about installation later.

Since I had my original Windows CD, I decided to give it a try and proceeded to install Multilanguage Support, on my computer. This involved going into the ADD/REMOVE PROGRAMS function of Windows and making the CD available at the right time. After that was complete the next step was to add a Czech keyboard layout. (Not a new keyboard, just a new selectable keyboard layout for Czech). The installation of the additional keyboard layout was similar to adding the Multilanguage Support. After a couple of minutes the new keyboard layout was installed and a small icon popped up in the lower right hand corner of the screen. It displayed “En”, indicating that my keyboard was currently set for “English” , and that I was in business. A simple two-key combination will switch the keyboard between En and Cz (Czech).

Note: During the installation I had selected the Czech (QWERTY) keyboard. The QWERTY keyboard layout is commonly used in the United States, and much of the Cz version is the same as the U.S. keyboard. The Czechs also use a keyboard with a QWERTZ layout. This is also available from Windows, but I elected to not use it.

Figure 1: The Windows Czech (QWERTY) keyboard, as laid out on a standard U.S. keyboard. Where there is a difference, the U.S. key is shown to the right of the Cz usage. The keys, highlighted in red, are used to control diacritical marks. Refer to Figure 2 for control details. The keys in blue can directly produce lower case letters with diacritical marks.

Using the Czech keyboard is pretty simple. Most of the time I use it with MS Word and switch back and forth between En and Cz, adding Czech characters as I go. Since some of the bells and whistles found on “store bought” programs, such as on-screen keyboards, are not available I suggest you make use of the graphics that are included. Figure 1, above, is the Czech (QWERTY) keyboard layout to help you find the characters that you want. In addition , Figure 2 is a table to help you create the Czech letters with diacritical marks. All of the Czech characters with diacritical marks that are supported by Windows Multilanguage Support are shown on this table. Considering the inconsistent alphabet information that I discovered in researching this subject, there might be more, but, as far as I know, this is it.

I’m pretty happy with Windows Czech Multilanguage Support. It’s simple to use, it works with Microsoft Word, Excel, etc., it does the job and the price is right. 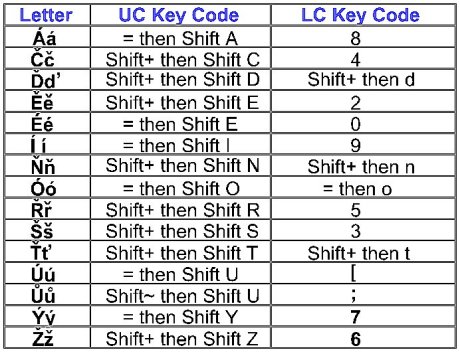 Figure 2: Using the Windows Czech keyboard to create letters with diacritical marks. For Windows 95/98 systems with Multilanguage Support installed and the Cz (QWERTY) keyboard selected. Refer to the notes below.

Table notes: To aid in using the table, above, the following locates the important control keys on a typical U.S. keyboard, referring to U.S. key caps. These two keys are highlighted in Red, on the upper left and right of Fig.1.

The following is for those of you that don’t have Windows Multilanguage Support installed and wish to install it yourselves. If you are fairly familiar with Windows 95/98 the procedure is simple, and will take about 15 minutes. If you are a computer novice it is still simple, but it could be confusing. If you are in doubt, I recommend getting some help.

I will do my best to take you through the installation. Before starting you MUST have your original Windows 95 or 98 CD available. If you don’t have it, don’t start the procedure.

With Windows 95 or Windows 98 running;

That wraps up the saga about Windows Multilanguage Support for the Czech language. This program meets my needs and those of my friends at the American Czechoslovak Social Club, in North Miami, FL, and it should do the job for you, too. Should you need features such as an on-screen keyboard reference, then you will need to find a commercial language program. I have heard that Microsoft Word 2000 will have that feature, but it is not available, as of this writing. For now, this will do nicely.

NOTE: I have not intentionally left out the Slovak Language. Unfortunately, Slovak does not appear to be available to Windows 95 users, and that is what I use… However, I recently discovered that it is available to the users of Windows 98. Although I have not researched this subject, it appears that installation and setup for Slovak is the same as the procedure described above. I am not 100% sure that “Central European” support will handle all of Slovak diacriticals. It does do many of them. Without Win98 I haven’t been able to really work on the subject, so there is no keyboard layout or diacritical chart at this time. If you are interested in using Slovak, and have Windows 98, check it out and give it a try.

There are two other papers regarding the subject of “Creating Czech Documents Using Windows” in this section. They are:

UPDATE to Using Windows to Create Documents in the Czech Language.